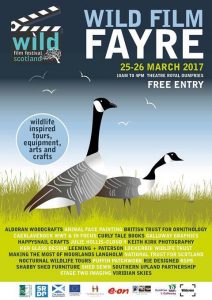 We’re going to be in Dumfries this Saturday (25th March) for the Wild Film Fayre being held at the Theatre Royal. We’re going to be in great company alongside talented craftspeople from all over Dumfries and Galloway. We’ll have a stand featuring our lovely books and books by our friends who are also writers and illustrators so we hope you’ll come along between 10am and 4pm to say hi.

The event is part of the fantastic Wild Film Festival Scotland which is being held at various venues throughout Dumfries between March 24th and 26th. You can find more details about the festival which features film, photography, topical talks and special guest appearances from wildlife experts by clicking here.

Look out for celebrity wildlife expert Simon King on Saturday at the Theatre Royal when he’ll be doing a book signing at 11am. There are amazing films like David Attenborough’s Light on Earth, The Flow Country and Unchartered Amazon being shown at the Theatre Royal, the Brigend Theatre and The Robert Burns Centre and the Gracefield Arts Studio will be hosting the British Wildlife Photographer Awards exhibition. It’s a packed programme and it’s great to be part of it.